Multifunction Actuator 6Out. 16A C-Load 6 In

Multifunction actuator. 6 outputs x 16A C-Load and 6 inputs. Multifunction sensor-actuator for DIN rail (4.5u) that offers multiple configurations of up to 3 shutter channels or 6 independent outputs of 16A, which all support capacitive loads. It allows manual control of its outputs thanks to the push buttons on the cover. It includes 10 independent logical functions. In addition, it incorporates 6 analog-digital inputs that may be configured as binary inputs for sensors and potential-free push buttons, as temperature probe inputs or as motion sensor inputs. Four room thermostats to control heating/cooling systems are included. 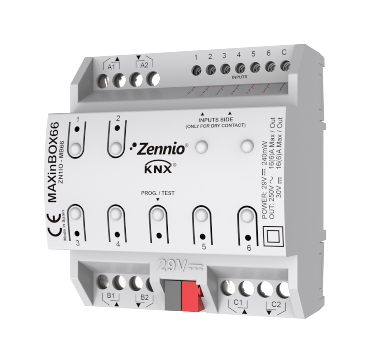 IMPORTANT NOTE:The production of this product, MAXinBOX 66, has been discontinued, since it has been replaced by MAXinBOX 66 v2 (Ref. ZIOMB66V2), including the same and even greater functionality. However, this discontinued device counts on all the support that may be required: manuals, databases, spare parts and technical support. Update ETS4/ETS5 with the last version to be able to import the product.

Only for ETS4/ETS5 (see Warning)